USE OF SOCIAL MEDIA AND SMARTPHONES

Table 1 shows that around three-quarters of the UK population use a smartphone on a daily basis – but 19% currently do not use/own one. This minority – which still amounts to almost 10 million adults in the UK – are therefore quite limited in the extent to which they can use social media to find out or share information. They can do it from their PC – but they cannot do it ‘on the go’. Looking at these 19% more closely, it shows that they are most likely to be older and/or in the lowest social grade of the population.

More specifically, those who do not currently use a smartphone are most likely::

There was no difference depending on gender.

Table 2: Those who never use a smartphone – by age

Overall, 85% of citizens use some form of social media at least occasionally. As regards Facebook – 79% of UK citizens use Facebook; this includes 59% who use it on a daily basis or more and 20% who use it less often than that (see Figure 1). Again around one in five adult UK citizens (21%), so around 10million people, do not use Facebook at all. Even though there is clearly some overlap with those who never use a smartphone these are the not the same people – thus around, half of those who do not use a Smartphone still use Facebook (as this is often accessed from a PC). In total, around nine per cent of citizens overall neither use a Smartphone nor Facebook – or around 5 million people of the adult UK population (see Table 3 below). 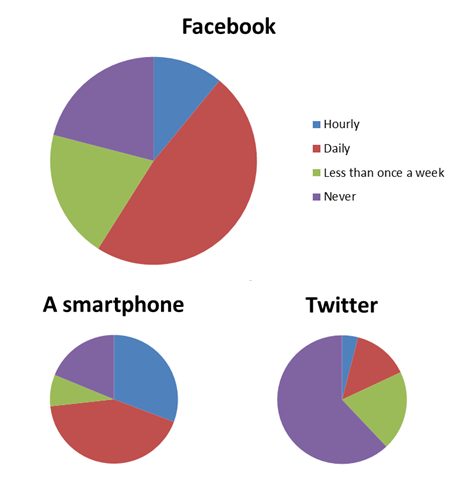 In fact, a slightly smaller sub-sample of these nine per cent – 149 citizens (seven per cent) – indicated that they never use a smartphone and never use any type of social media, including Facebook, Twitter, or other types of social media (including YouTube, Instagram, etc.). Once again these citizens are most likely to be aged 50 or older (79%) and be classified as social grades C2, D or E (62%).

Table 3: Citizens grouped depending on Facebook and/or Smartphone use

Interestingly, even though young people are far more likely to be Facebook users, relatively high proportions of older people use it too. Thus, while 93% of 18-24 year olds use it at least sometimes and 76% of those in this age category use it on a daily basis, 55% of those aged 75 or above use it occasionally or more and 39% on a daily basis. One other noticeable pattern is that there is virtually no difference between 18-24 and 25-34 year olds in the proportion that use Facebook on a daily basis.  Further details are provided in Figure 2 below. 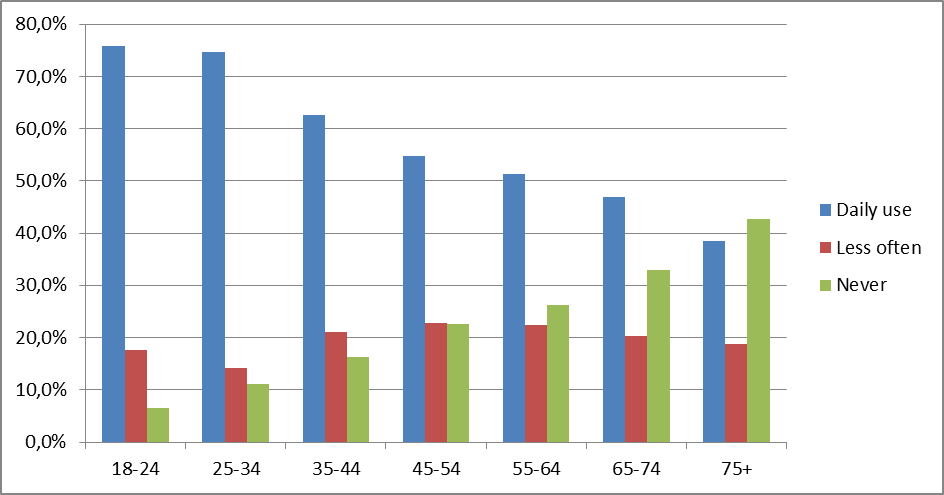 The analysis also showed that there is a significant difference in the use of Facebook depending on gender (Figure 3). Thus, 65% of women use Facebook on a daily basis compared with 53% of men (p<0.001). Similarly, while 82% of women use Facebook at least sometimes, it’s only just above three-quarters of men who do so (p<0.01). 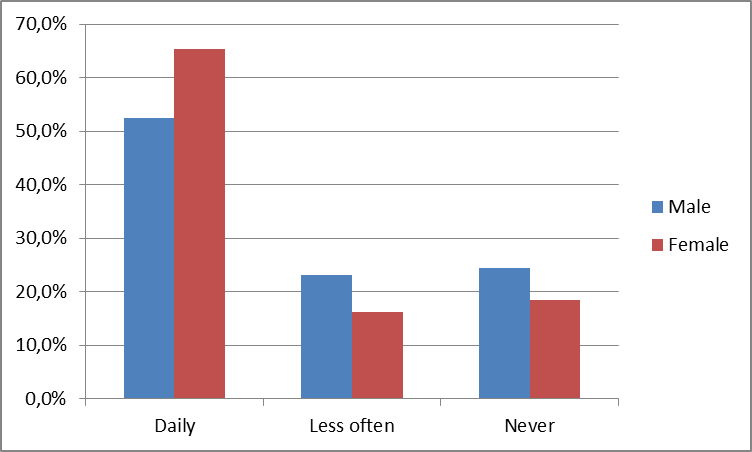 When it comes to Twitter use – as seen in Table 1 – it is used by fewer people than Facebook. Thus, around one-in-five (18%) use it on a daily basis and 38% use it at least occasionally (less than once a week or more). And once again Twitter users are most likely to be young citizens – 53% of under 50s use Twitter at least sometimes compared with only 22% of those aged 50 or above. This is further illustrated in Figure 4 – which shows that daily Twitter use is at a peak among 18-24 year olds (37%) and falls to just one per cent among those aged 75+. 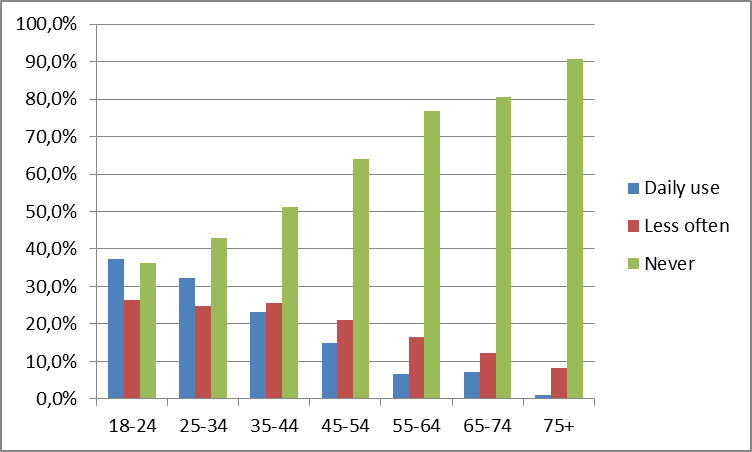 USE OF SOCIAL MEDIA IN EMERGENCIES

Figure 5: Use of social media during an emergency

The age profile of those of who have used social media during an emergency tells an interesting story. As can be seen in Figure 6, around half of citizens in each of the three age categories of those aged below 45 (i.e. 18-24, 25-34 and 35-44) have used social media in this way – with the use the highest among the youngest age group. For the older age categories this use is much smaller – for those aged 45-54 it is only around a quarter (26%) and it declines all the way to nine per cent of citizens aged 75 or older who used social media to look for or share information during an emergency.

Figure 6: Use of social media in an emergency by age

However, even though the proportion of citizens using social media in an emergency is fairly similar for those aged between 18 and 44, the way it is used is very different. Thus, those in the youngest age group (18-24) are by far the most likely to have used it to look for information only (40%) compared with those in the older age groups – 19% of those aged 25-34 used it to look for information only. In contrast, while 36% of citizens in the 25-34 age group have used social media to share information during an emergency, only 16% of those in the youngest age group have done so. This information is summarised in Table 4 below.

This suggests therefore that women, those aged 25-34 and those in social grades ABC1 are most likely to share information during an emergency.

So what are the reasons why some people are reluctant to use social media during an emergency? Figure 7 below suggests that these relate mainly to technological concerns – that mobile phones and social media would not work properly in a serious emergency (62%)  – and reliability worries – that information shared on social media is not reliable (60%) and that there are many false rumours on social media (64%). Lack of confidence in using social media was only a reason for around a third (28%) of citizens.

Figure 7: Reasons for not using social media during an emergency

Figure 8 below shows that the 432 citizens who had previously used social media to share information during an emergency were most likely to have done so to share weather conditions or warnings (43%), road or traffic conditions (42%), or their own feelings or emotions about the event (31%).

Figure 8: Types of information shared during an emergency

Table 5 on the other hand highlights any significant differences in the extent to which citizens with particular characteristics were more likely to have shared particular types of information on social media. In summary:

Table 5: Groups of citizens most likely to share particular types of information on social media

Figure 9 below shows that the majority of UK citizens currently do not expect emergency services to respond to messages posted to them on social media during an emergency. Thus, only around a third  (30%) of citizens agreed or strongly agreed with the statement that they would expect to get a response to such a message within an hour [Note that this is considerably lower than in the USA compared with a survey conducted there in 2012 – where around 40% agreed with such a statement].[1] The main reason for this appears to be that more than 60% of citizens think that emergency services are too busy during an emergency to monitor social media.

However, it is worth noting that despite this overall rather low expectation of emergency services to monitor their social media accounts and to respond to messages sent via social media, there are noticeable generational differences in attitude. These suggest that younger people – and those using mobile technology in their daily lives – generally have much higher expectations. Thus, for example, almost half of those aged 18-34 (48%) think that emergency services should regularly monitor their social media compared with only 27% of those aged 55 or older. Similarly, 41% of smartphone users agreed with this statement compared with 22% of those currently not using a smartphone.

Only a small minority of UK citizens (seven per cent) have downloaded a smartphone app that could help them in a disaster or emergency. Even when excluding those 376 participants who currently do not use a smartphone, the proportion is still only eight per cent. This is likely to represent a fairly unique group of citizens with a particular interest in emergency response or in smartphone applications. More specifically these are more likely to be:

Of the 135 survey participants who had downloaded an app that could help in a disaster:

Ten participants indicated that they had downloaded an app that did not fall into these four broad categories. These included:

Figure 10 on the other hand shows how likely participants overall thought it was that they would use smartphone apps for a variety of purposes as a result of an emergency in future. It shows that citizens are generally most likely to use apps to receive information during emergencies rather than to share information. Thus, around four in ten thought it was at least quite likely they would use an app for such a purpose. However, overall, only about 19% of the population think it is very likely they will use an app in future for at least one of these purposes. 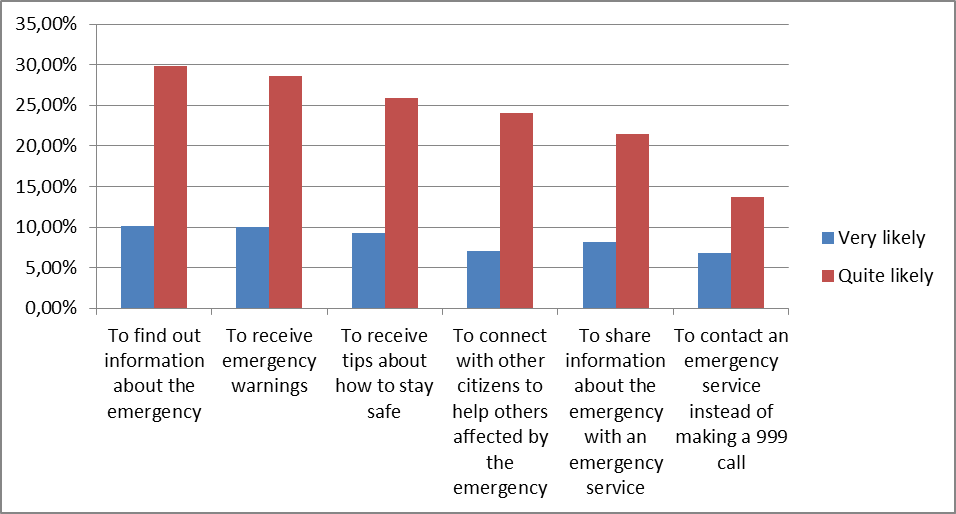 Figure 10: Likelihood of using an app in future for different purposes

Perhaps unsurprisingly, those who had downloaded an app in the past were significantly more likely to think that it was very likely they would use an app for one or more of these purposes in future.

A total of 2000 UK citizens completed the survey, including 1118 women (55.9%) and 882 men (44.1%). The vast majority of respondents (91.2%) were between 25 and 74 years old. Around two third of the respondents (66.6%) were in the social grade ABC1 and around one third (33.4%) in the social grade C2DE. A large proportion of citizens (39.6%) were working full time and 25.3% was retired. Most respondents (83.1%) lived in England, especially in the South and East of England (33%). As there were significant differences between the respondents and population statistics the sample was weighted to be representative of the population. Information about gender, age, social grade, working status and region was used to weight to the sample. The analysis in the main part of this document is based on the weighted sample. The tables and figures below present further information about the demographic statistics of the unweighted sample in regards to age, social grade, working status and region. 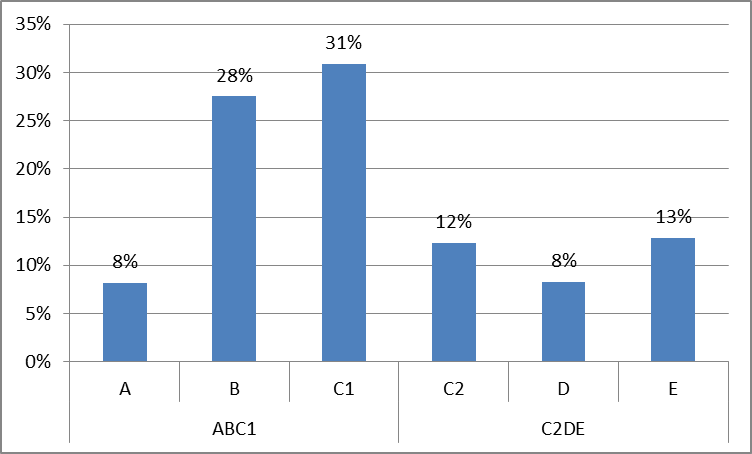 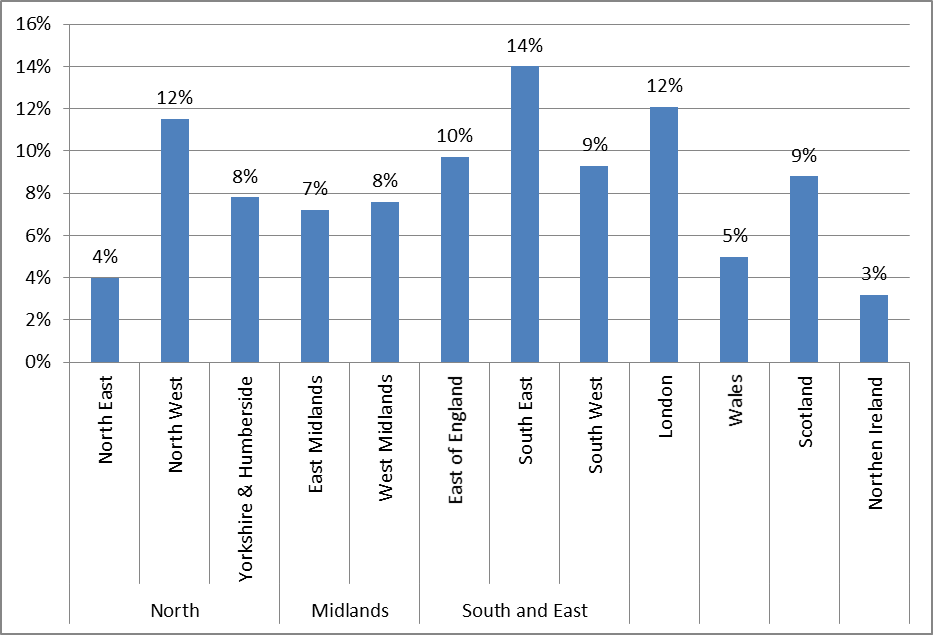 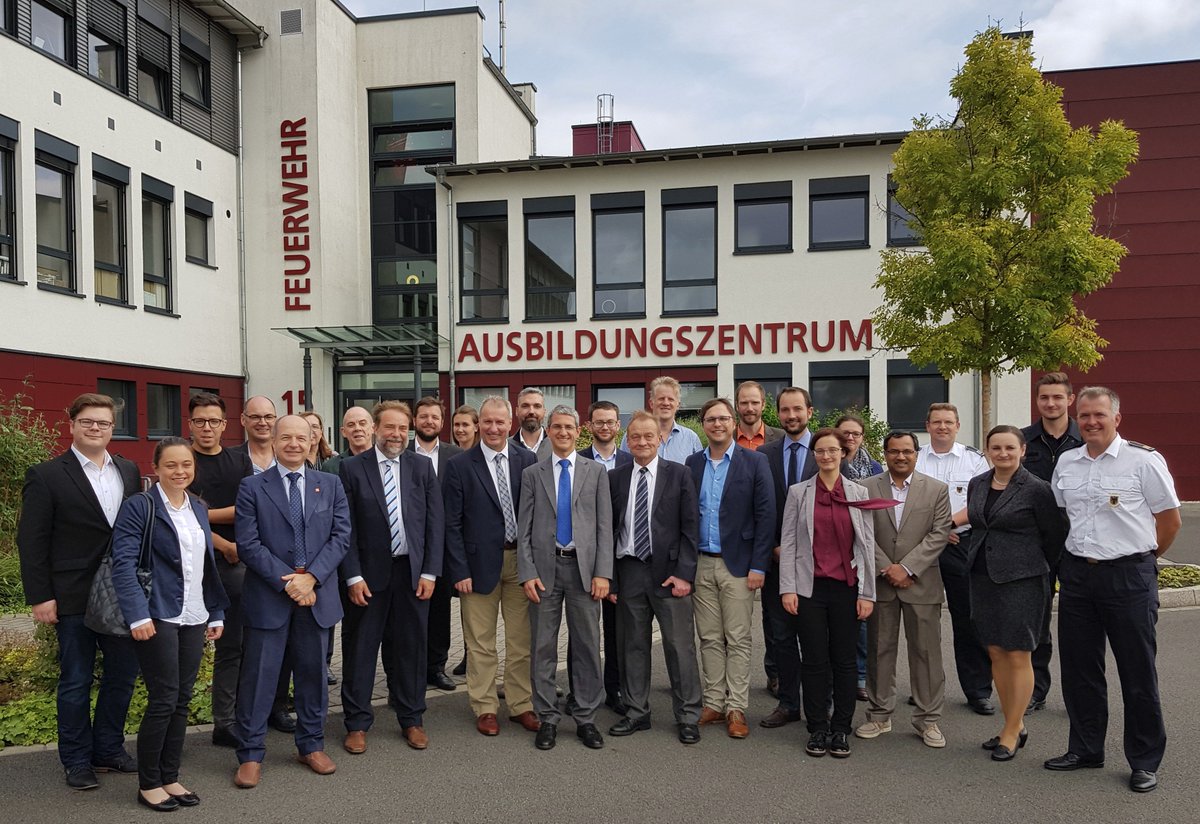 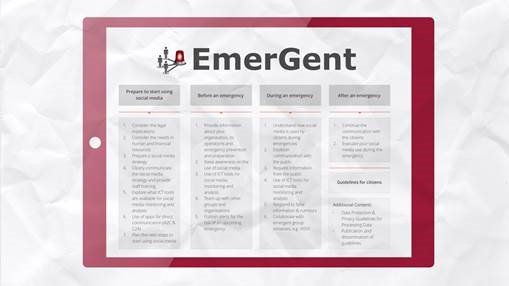